In November, the Monthly Trail Run takes advantage of the near perfect weather forecast for this run up to the top of Black Mountain featuring 360-degree panoramic views stretching from the bay out to the ocean. The run then returns via the beautiful (and shady) Stevens Creek Nature Trail. All the details can be found here.

PARC's 26th anniversary party will be held this Sunday, October 14, at nearby Hidden Villa. This is a beautiful site in the Los Altos Hills foothills, with an organic farm, animals, and well-maintained trails (for…

This Saturday PARC's Monthly Trail Run returns to one of our most popular routes, Wunderlich Park in Woodside. Wunderlich's trails are mostly shaded and ideal for a late Summer run. The run will be followed by brunch at Buck's for all interested including the Saturday morning group from Sawyer Camp who are most welcome to join us. 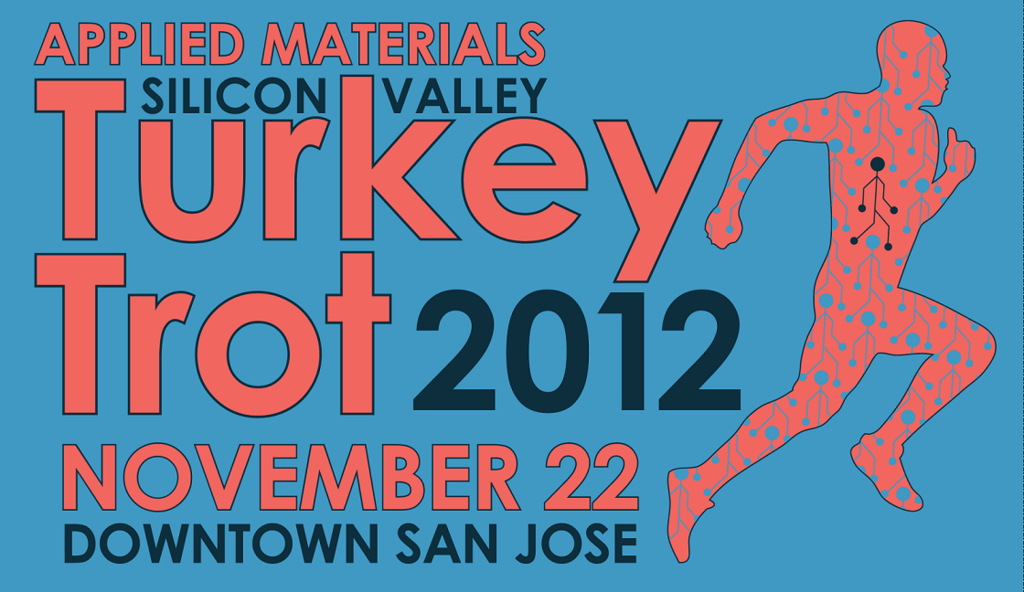 Don't miss out on your chance to be a part of the 8th Annual Applied Materials, "Silicon Valley Turkey Trot". Bibs and commemorative shirts are limited to the first 25,000 registrants. So, why wait? Register today, to reserve your spot!…

The event takes place at Palo Alto Baylands on Saturday, Oct. 27. It was created 6 years ago to raise funds and awareness for growing youth…

In August, we will experience another beautiful local redwood preserve, located on the western slopes of the Santa Cruz Mountains overlooking Half Moon Bay. The park features towering redwoods, active creeks, and plentiful ferns, on a mostly-shaded course. Details can be found here.

On Sunday July 1, the Monthly Trail Run ventures deep into the Santa Cruz Mountains directly over the hill from Palo Alto. It's very likely that water will still be flowing in the creeks. This is a mostly-shaded course with a waterfall, a pond and a historic cabin site. This is a beautiful park, and well-worth the slightly longer drive. For details click here.

Join us for a new four-park trail run Saturday 5/5/2012 with sweeping scenic views from the ocean to the bay. Carpool for the ride up to Skyline Blvd and take in the sights on our 7-mile or 12-mile trail run options. For all the details, see the May Monthly Trail Run page here.

PARC will be at Sky High in Santa Clara on Thursday night (7 pm) for a fun workout.

Tomorrow morning, Saturday, April 7, 2012, we run the open dramatic hills above Marin's Rodeo Beach, meeting up with the popular BARF trail run group for our annual PARC & BARF, and getting an insider's tour of the Marine Mammal Center facilitated by PARC Board Member Stan Jensen all on tap. Details at:

This Sunday, March 4, 2012, the PARC's Monthly Trail run heads to nearby Windy Hill and the weather forecast for Sunday is exceptional. This run is close to Palo Alto and Windy Hill is PARC's favorite Monthly Trail Run route.

We gather at 8:20 in the Windy Hill parking lot off of Portola Rd. We head out at 8:30. Two routes of 8 and 12 miles. Maps provided. No organized car pool this month. But we are heading to Konditorei, a small coffee & bagel shop just a few minutes from…

Shirt orders will be taken until March 13.  Kirsten will have the order form every Monday and Wednesday night.  Cash or check is accepted.

We are planning to coordinate another PARC running shirt order this year. We'll proudly display our NEW LOGO on the shirts! We want a running shirt that will stand out in a crowd, so others will be easily able to spot PARC runners in a crowd (i.e. no white tops!). One option is a bright green top. What do you think of this shirt in lime green with a black logo? …

Monthly Trail Run planning for the year is in progress and the next three runs are scheduled:

On the next two runs we head to our favorite near by trail systems followed by brunch at nearby cafes. The…

Sports Basement 20% sale until it snows!

From sponsor Sports Basement!
They are Making the Most of Winter 2012!…
Continue

PARC's traditional first trail run of the year, in the Santa Cruz Mountains above Saratoga, features spectacular views to the ocean from a surprisingly exposed cliff face as well as many miles of tree sheltered soft forest trail. In most years the waterfall offers a pause early in the run - will it be flowing this year? We have maps to guide an intermediate 6.5-mile route and a slightly more challenging 9.2-mile route -- both routes are quite beautiful.

I've just updated the details for this Sunday's trail run. This month, instead of a runner's potluck, we will meet at Buck's after the run. Both Buck's and Wunderlich are in nearby Woodside. To help have us together at the same time at Buck's we are staggering the start times. The long run will start at 8:30 (gather at 8:20) and the shorter intermediate run will start at 9:10 (gather at 9:00). Hopefully these split start times will result in both groups finishing at about the same time.…

Send your PARC photos to Drew.

PARC has a new coffee sponsor - Coffees of Hawaii!

PARC has a new coffee sponsor - Coffees of Hawaii!

Members receive 20% off all orders and free shipping for orders >$50.  See details under About the Club - Sponsors page.

Boston Marathon Registration begins on Monday September 12 at 10am EDT (7am PDT), read the following link to be aware of the new registration process and dates.